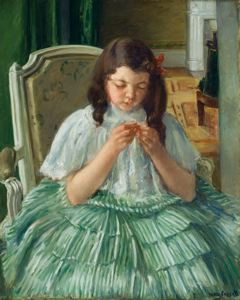 
"Francoise in Green, Sewing" dates from the final stage of Cassattâs career. In her later paintings, Cassatt increasingly focused on depicting individual young children rather than women with babies. Earlier in her career, her single portraits of children were usually actual portraits of family members, specifically her nieces and nephews. At this stage, however, these children had grown, and she turned to young models such as Francoise, who was most likely from the nearby village of Mesnil-Theribus, Oise.

Among the distinctive features of Cassattâs later works are changes in the manner of applying paint and the paint surface itself. The artist lavished care on the texture, color, and pattern of the voluminous blouse and skirt, conveying the character of the fabrics with quick strokes of a heavily loaded brush. She ties the paintingâs foreground to the background by repeating the green of the skirt in the drapery behind the model. In making this costume such a defining element of the composition, Cassatt may have been inspired by her recollection of figure and history paintings by seventeenth-century artists such as Velasquez and Rubens in which setting and costume play an important role.

Keywords Click a term to view the records with the same keyword
Female
Child
Chair
Fireplace
Hands
Needle Crafts
Fashion
Formal dress
Parlour
Portfolio List Click a portfolio name to view all the objects in that portfolio
This object is a member of the following portfolios:

Your current search criteria is: Object is "Francoise in Green, Sewing".