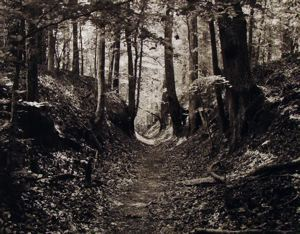 2007
From the series, Natchez Trace


Kate Cleghornâs photographs picture evidence of the historic and pre-historic past that is still with us today. Sunken Trace captures the appearance of a segment of the Natchez Trace that has been work into a deep rut through the primeval southern forest. By the time she made the photograph, the heyday of the routeâs use by Americans of European and African heritage was nearly two centuries old. In fact, the Natchez Trace became obsolete before the Civil War âa relic of time before the new-fangled steamboat made it quicker, easier, and cheaper to go up the Mississippi and Tennessee rivers to Nashville rather than to walk the ancient trade route of the Choctaw and Chickasaw.

2008.0015
Portfolio List Click a portfolio name to view all the objects in that portfolio
This object is a member of the following portfolios:

Your current search criteria is: Keyword is "G:DQ".