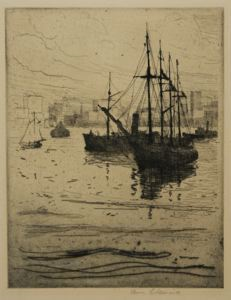 
The wharf-side view of the ships in Goldthwaiteâs New York Harbor recalls similar etchings of European ports done in the nineteenth century by American expatriate James McNeil Whistler. The large, dark boat in the middle ground seems to softly glide into the viewerâs space using only the force of the current rather than its folded sails. Goldthwaiteâs image, unlike those by other artists, capitalizes on the changing skyline of New York City and the changing technology of the ships that occupied the Harbor.
SM 4/20/09

Keywords Click a term to view the records with the same keyword
Water
Sailing Ship
Portfolio List Click a portfolio name to view all the objects in that portfolio
This object is a member of the following portfolios:

Your current search criteria is: Object is "New York Harbor".