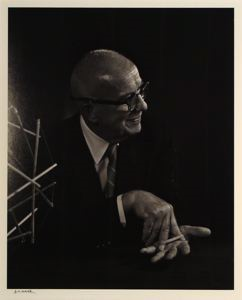 
Buckminster Fuller (1895â1983) Fuller is best known for his Dymaxion (i.e., dynamic maximum tension) house and car, and the geodesic dome, which is based on the synergistic principle of tensegrity. Tensegrity is the balance of forces of tension and compression. Fuller wrote more than 30 books and coined the term âSpaceship Earth.â He observed no boundaries between science and art and believed deeply in the designerâs responsibility to address poverty and the growing population of the world. Such noble sentiments were surely admired by Karsh, who sought to portray the most heroic men and women of his day.

Keywords Click a term to view the records with the same keyword
Portraits
Male
Eye Glasses
Suit
Portfolio List Click a portfolio name to view all the objects in that portfolio
This object is a member of the following portfolios:

Your current search criteria is: Object is "Buckminster Fuller".