Shugg Lampley at the Garden Gate 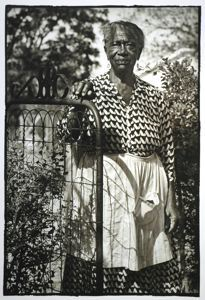 Shugg Lampley at the Garden Gate


Chester Higgins was raised in the tiny town of New Brockton, in the Alabama Wiregrass. He attended Tuskegee Institute (now University) and studied there informally with the photographer P. H Polk. He later went to New York, where he eventually became a photographer for the New York Times in 1975, and subsequently published his photographs in many major twentieth-century periodicals.

Higgins made many photographs of his large, extended family and Shugg Lampley was his favorite aunt. One almost senses Aunt Shuggâs patience with the 22-year old photographer who was visiting his home in southeast Alabama after a couple of years away at college. Her kind eyes, closed lips, and ready hands are evenly illuminated by the summer sun as she stands in the gate crowded by a hedge. Soft, dappled light falls on her face, her print dress, and her apron with its convenient pocket stuffed, as it appears to have been often, with a handy hanky or other essentials. Itâs the image of a loving, caring elder that embodies the respect for age and wisdom that Higgins learned early and never forgot.

Keywords Click a term to view the records with the same keyword
Female
Plants
Jewelry
Portfolio List Click a portfolio name to view all the objects in that portfolio
This object is a member of the following portfolios:

Your current search criteria is: Object is "Shugg Lampley at the Garden Gate".