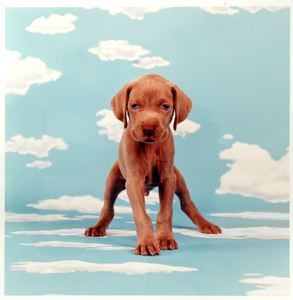 
"Cloud Buster" was reproduced on the cover of William Wegman Puppies 2003, a wall calendar. The subject is a young dog who appears to "float" in a cloudy sky, his back legs splayed as if he is off balance or falling. The composition is clearly staged in a studio, with the puppy positioned on a photographer's paper backdrop printed a sky blue color, and overprinted with white clouds. As with many of Wegman's dog portraits, the animal peers quizzically out at the viewer, his brow slightly knitted suggesting confusion or bemusment.

While the image can be construed on the surface as simply a sentimental image of a puppy, the title suggests that the artist has presented more complex, if somewhat playful themes as well. The term "Cloudbuster" refers to a fanciful invention by the Austrian psychoanalyst Wilhelm Reich that he claimed would bombard cloud formations with rays of energy he termed Orgone and produce rain. The term itself suggests that the intent was to make the clouds dissipate by drawing the moisture from them in the form of rain. In this case, the "falling" puppy and his stance with his back legs splayed to the sides may suggest that he is going to "make rain," that is, urinate. It is a common practice for Wegman to create plays on words or puns within his titles, frequently expressing an idea such as this one that is whimsical or gently amusing by relating them to compositional shapes. Here, the forms created by the puppy's limbs and mirrored by his body are triangles, which paradoxically are considered among the most stable and balanced of geometric forms. To create this stable geometric form and position it as if falling from the sky (rather than securely set on solid ground) suggests yet another visual pun conveyed by the artist in this image.

Keywords Click a term to view the records with the same keyword
Dogs
Figure
Cloudy Sky
Infant
Puppy
Portfolio List Click a portfolio name to view all the objects in that portfolio
This object is a member of the following portfolios:

Your current search criteria is: Keyword is "PA".