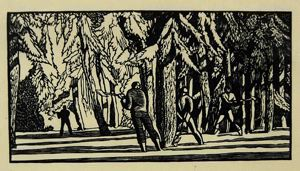 
Rockwell Kent produced the design for this woodcut, which was used in an advertising campaign for stock brokerage houses between 1929 and 1930. In that era, obviously the intention was to deflect attention from the economic disaster of the Great Depression by focusing on the strength and solidity of the American business, as represented by forestry. The image implies the importance of the American worker, whose diligent labor would save the American way of life. The darker tonality at the right of the print gives way to a lighter, brighter future on the left. The block was cut by a noted woodcut artist, J. J. Lankes from a drawing by Kent.

Keywords Click a term to view the records with the same keyword
Tree
Laborers
Portfolio List Click a portfolio name to view all the objects in that portfolio
This object is a member of the following portfolios:

Your current search criteria is: Object is "Woodchoppers".