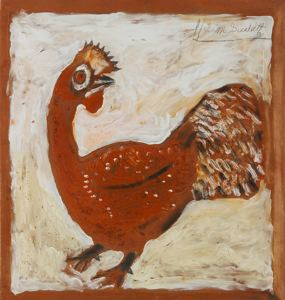 
Sudduth was a master of a very unusual mediumâhe mixed clays that he dug near his home in Fayette, Alabama with sugary liquids, creating a substance that he applied with fingers, sticks, and other implements. He was an ingenious individual who was savy with mechanical equipment, and he discovered he could create soft, thick areas of intense black by smoking his boards with lawnmower exhaust. At times he applied the clays as a dry, pastel-like substance, which created a strikingly different surface and image.

"Rooster" is an example of Sudduth's ability to create refined and sophisticated surface textures. The background has been loosely brushed with pigment and the figure of the rooster appears to float on this amorphous background. The twisted neck of the bird mirrors the curve of his tail, the feathers suggested by small strokes of varied colors of clay. The granular clays create a rich surface of various shades of red.

Keywords Click a term to view the records with the same keyword
Animals
Portfolio List Click a portfolio name to view all the objects in that portfolio
This object is a member of the following portfolios:

Your current search criteria is: Object is "Rooster".