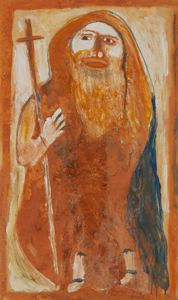 
Sudduth did not paint a large number of religious subjects, but rare examples such as "John the Baptist" depict monumental, weighty figures. The work is composed predominantly of brilliant red clays, with blue and gold accents of paint. As Susan Mitchell Crawley has observed: âVigorous application of the mediums produces a rough, disheveled John the Baptist much like those of early Renaissance altarpieces that suggest the unconventional nature of the prophet in the desert. Running counter to expectation and the norms of chiaroscuro, the nose is darker than the surrounding face and not shaded; the nostrils are white not dark. One eyelid is gold; the other eye is rimmed in red, giving a sense of shadow but also of wildness. While one eye looks straight at the viewer, the other gazes off to the side, yet rather than making the saint look wall-eyed, the double glance seems to add layers to the saintâs expression.â

Keywords Click a term to view the records with the same keyword
New Testament
Religious Figures
St. John
Saint
Portfolio List Click a portfolio name to view all the objects in that portfolio
This object is a member of the following portfolios:

Your current search criteria is: Object is "John the Baptist".