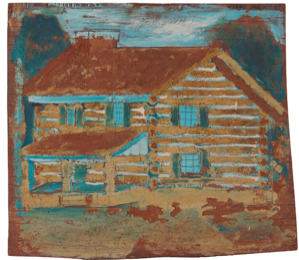 
Sudduth was a native of West Alabama, whose work came to prominence in the 1970s and 1980s. He was widely known locally, largely through his participation in festivals such as the Fayette Art Festival and the Kentuck Festival in Northport, Alabama. He gained futher recognition in the late 1970s by his participation in the Smithsonian Institution's Bicentennial Festival of American Folklife in Washington, D.C.

Untitled (Two-Story Log Cabin) was given to the Museum's collection by Georgine Clarke, a founder and manager of the highly successful Kentuck Festival, which since its inception supported the work of self-taught artists. The log house was one of the artist's earliest subjects, and he repeated it consistently. While well known for his medium, which he called "sweet mud"âa mixture of sugary liquid and various kinds of clay which he dug himselfâthis painting also incorporates standard pigmented paint. The subject reiterates in form and materials the reality of the domestic structures that were most familiar to him in rural West Alabama; they dominated the landscape there in the first half of the twentieth century.