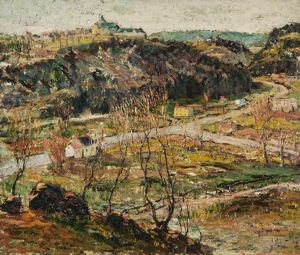 
Untitled (Inwood, Upper Manhattan) is one of a group of works Lawson painted between about 1912 and 1922 depicting the low hills bordering the Hudson River in the Washington Heights area of northern Manhattan. At least four of these works are now located in public collections: two at The Phillips Collection in Washington, D.C. and two at the Columbus Museum of Art in Columbus, Ohio. In the early twentieth century Inwood was still a relatively remote area of small farms and rural landscape. Lawsonâs ability to create compelling compositions from such humble subjects was an element of his work that reflected the influence of other members of The Eight, most prominently Robert Henri and John Sloan.

American Paintings from the Montgomery Museum of Fine Arts, cat. no. 55, p. 142

Keywords Click a term to view the records with the same keyword
Landscapes
Mountains
Hilly
Portfolio List Click a portfolio name to view all the objects in that portfolio
This object is a member of the following portfolios: