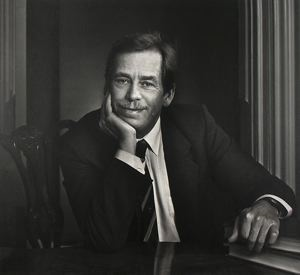 A Czech humanist, playwright, and non-violent political dissident turned democratic politician, Havel was voted fourth in a 2005 global poll of the world's top intellectuals. After the Velvet Revolution brought a bloodless end to Czech communism, Havel was elected president of the Czech and Slovak Federation in 1990. He resigned in 1992 but was then elected the first President (1993â2003) of the new Czech Republic. Havel has won the U.S. Presidential Medal of Freedom (2003) and the Order of Canada (2003), among many other accolades. Karsh made his portrait the same year he was first elected president of Czechoslovakia.

Keywords Click a term to view the records with the same keyword
Portraits
Political
Male
Suit
Watch
Portfolio List Click a portfolio name to view all the objects in that portfolio
This object is a member of the following portfolios:

Your current search criteria is: Object is "VÃ¡clav Havel".