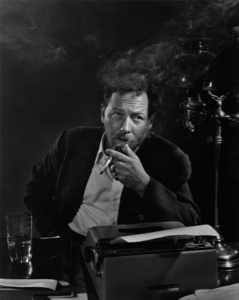 
Tennessee Williams (1911â1983) The plays of this American writer include The Glass Menagerie, A Streetcar Named Desire, The Rose Tattoo, and Cat on a Hot Tin Roof. In these, as in many of his later works, Williams explores the passions and frustrations of a disturbed and frequently brutal society. Williams won a Rockefeller Fellowship, two Pulitzer prizes, a Kennedy Honors Award, and a Medal of Freedom. The playwrightâs deceptively easy manner, informal speech, and carefree air reminded Karsh of various characters in Williamsâ workâordinary-looking men hiding an unsuspected fury which invariably erupts on stage, often in tragedy.

Keywords Click a term to view the records with the same keyword
Portraits
Male
Glassware
Smoking Materials
Humanities
Portfolio List Click a portfolio name to view all the objects in that portfolio
This object is a member of the following portfolios:

Your current search criteria is: Object is "Tennessee Williams".