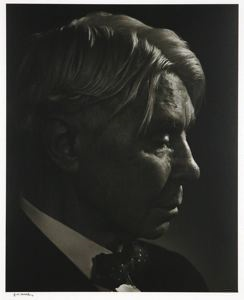 
Carl Sandburg (1878â1967) The American poet, journalist, and biographer worked for the Chicago Times and Daily News, beginning research for his Pulitzer Prize-winning biography of Abraham Lincoln after earning recognition for his poetry. His lifelong affection for Chicago is reflected in that poetry, for which he won a Pulitzer Prize in 1951. This portrait was done in Karshâs New York studio. Karsh remarked that Sandburgâwith his rough and worn face and white hair cascading over his eyesâlooked like a self-made man and that the poverty of his youth was clearly written on his face and expressed in his speech.

Your current search criteria is: Object is "Carl Sandburg".