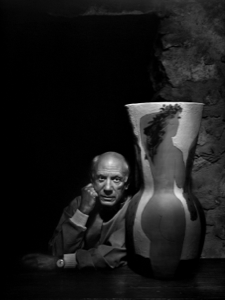 
Pablo Picasso (1881â1973) Picasso was one of the most innovative and versatile artists of the twentieth century. He is most famous for creating Cubism with George Braque. Throughout his career he possessed a prolific creativity, producing an enormous volume of influential paintings, drawings, prints, sculpture, and ceramics. Karsh said he felt a particular affinity with artists because they understand the creative process. During Picassoâs sitting, Karsh noticed that Picasso saw himself reflected in the cameraâs lens and instinctively moved slightly to improve the composition. In his books Karsh published three different pictures of Picasso from this 30-minute photo session.

Keywords Click a term to view the records with the same keyword
Portraits
Male
Artist
Watch
Portfolio List Click a portfolio name to view all the objects in that portfolio
This object is a member of the following portfolios:

Your current search criteria is: Object is "Pablo Picasso".