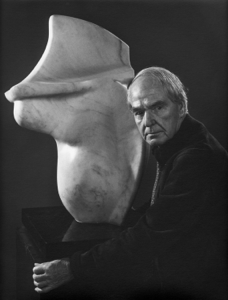 
Henry Moore (1898â1986) Moore became the best-known modern artist in twentieth-century England. Karsh made this portrait in Mooreâs Much Hadham studio about the same time that the prolific sculptor was in the process of donating a large collection of his work to the Art Gallery of Ontario in Toronto, near Karshâs home in Ottawa, Canada. Moore is one of several people Karsh portrayed more than once. Moore had posed in his studio in 1949, and he sat with sculptors Jacques Lipchitz (1891â1973) and Marino Marini (1901â1980) in 1970 in Cararra, Italy.

Keywords Click a term to view the records with the same keyword
Portraits
Male
Artist
Sculpture
Portfolio List Click a portfolio name to view all the objects in that portfolio
This object is a member of the following portfolios:

Your current search criteria is: Object is "Henry Moore".