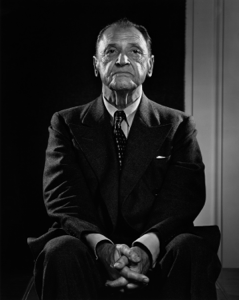 
William Somerset Maugham (1874â1965) Maugham was a British novelist and dramatist whose best-known works are Of Human Bondage and The Razorâs Edge. Maugham wrote with wit and irony, frequently expressing a cynical view of life. Many of his plays have become classics of the modern theater, and several of his short stories have been made into films. Karsh characterized Maugham as a âpolished, elegant, and sympathetic listener, with an immense cunning in penetrating another manâs inner-most thoughts.â

Keywords Click a term to view the records with the same keyword
Portraits
Male
Suit
Humanities
Portfolio List Click a portfolio name to view all the objects in that portfolio
This object is a member of the following portfolios: