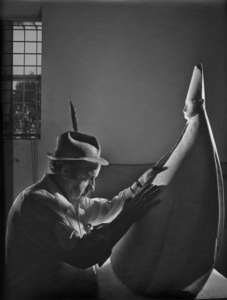 
Giacomo ManzÃ¹ (1908â1991) The best-known Italian sculptor of the twentieth century, ManzÃ¹ won the grand prize for Italian sculpture at the Venice Biennale. He created architectural commissions including doors for St. Peterâs Basilica in Rome, as well as freestanding statuary. This portrait shows ManzÃ¹ immersed in thought, laying his hands on one of his fifty sculptures of Catholic clerics depicted in their billowing robes as he had seen them as a child. Karsh illuminated his subject with at least three different light sources to capture the quiet drama in ManzÃ¹âs sparse studio where the sculptor insisted on being photographed with his sculpture.

Keywords Click a term to view the records with the same keyword
Portraits
Male
Artist
Hat
Sculpture
Portfolio List Click a portfolio name to view all the objects in that portfolio
This object is a member of the following portfolios:

Your current search criteria is: Object is "Giacomo ManzÃº".