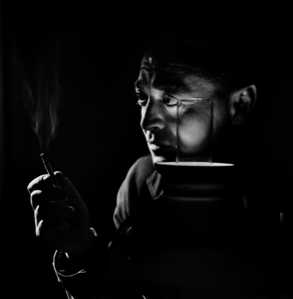 
Peter Lorre (1904â1964) Born LÃ¡szlÃ³ Lowenstein in Hungary in 1904, Lorre began his acting career in the theater at the age of seventeen and first appeared in an English-language film in 1934. Lorre became well known in the âMr. Motoâ films and appeared with Humphrey Bogart in The Maltese Falcon (1941) and Casablanca (1942). On screen, Peter Lorre was often the bumbling sidekick of the arch villain; however, Karsh found him to be a gentleman of wit and culture. In this portrait commissioned by Life Magazine, Karsh felt the dramatic effect of the lamplight on Lorreâs face synthesized every character he played in American films.

Keywords Click a term to view the records with the same keyword
Portraits
Male
Cigarette
Portfolio List Click a portfolio name to view all the objects in that portfolio
This object is a member of the following portfolios:

Your current search criteria is: Object is "Peter Lorre".