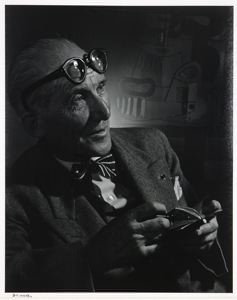 
Le Corbusier (1887â1965) Le Corbusier was the pseudonym of Charles-Edouard Jeanneret, an influential Swiss architect and urban planner. Time magazine said, âIrascible, caustic, Calvinistic, Corbu was modern architectureâs conscience.â Throughout his long and productive life Le Corbusier was a respected theorist and practitioner who was also known for his abstract paintings. When Karsh photographed Corbu in his home, he found the architect, artist, and author cooperative, but quiet. Karsh seated him before one of his paintings and Corbu perched his distinctive, bold, black, round-rimmed eye-glasses on his forehead as was his habit.

Keywords Click a term to view the records with the same keyword
Portraits
Male
Eye Glasses
Writing Instruments
Humanities
Portfolio List Click a portfolio name to view all the objects in that portfolio
This object is a member of the following portfolios:

Your current search criteria is: Object is "Le Corbusier".