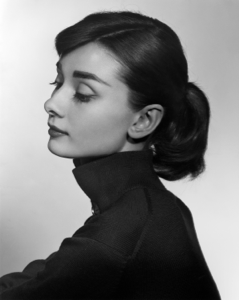 
Audrey Hepburn (1929â1993) Hepburn trained as a ballerina, but soon turned to stage and screen. She played a âslender, elfin, and wistful beautyâ according to the New York Times and won the Academy Award for Best Actress in Roman Holiday (1953). Her stylish sophistication again came out in Funny Face (1957), Breakfast at Tiffanyâs (1961), and My Fair Lady (1964). In this iconic shot, Karsh captured the starletâs exquisite features, patrician bearing, and chic sense of fashion. The clarity of large-format photography in the hands of a master reveals the perfection of her complexion and the elegant extension of her eyebrows.

Keywords Click a term to view the records with the same keyword
Portraits
Female
Portfolio List Click a portfolio name to view all the objects in that portfolio
This object is a member of the following portfolios:

Your current search criteria is: Object is "Audrey Hepburn".