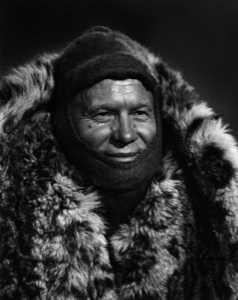 
Nikita Khrushchev (1894â1971) Karsh was invited to portray Khrushchev, First Secretary of the Communist Party of the Soviet Union (1953â1964) and Premier of the U.S.S.R. (1958â1964) at his country house outside Moscow. The Premier and his family had just returned, tanned, from an April vacation on the Black Sea. When Karsh saw Khrushchev walking with his three-year-old grandchild skipping ahead of him, he felt that the portly figure demanded a large fur coat. His subject consented, sent assistants to find one, and added a knitted woolen hat.

Keywords Click a term to view the records with the same keyword
Portraits
Political
Male
Portfolio List Click a portfolio name to view all the objects in that portfolio
This object is a member of the following portfolios:

Your current search criteria is: Object is "Nikita Khrushchev".