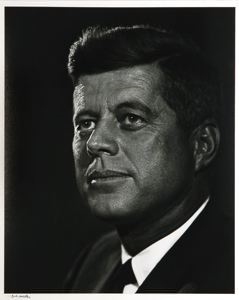 
John F. Kennedy (1917â1963) Kennedy was the youngest man and first Roman Catholic elected President. Educated at Harvard, he captained a patrol torpedo (PT) boat in World War II. He served in the House of Representatives (1947â1953) and as Massachusettsâ junior senator (1953â1961) while authoring several books, including Profiles in Courage, which won a Pulitzer Prize (1957). Karsh portrayed the presidential candidate and his running mate, Lyndon Johnson, in the Senate Office Building. Kennedy glanced at Johnson when he entered the room and Karsh captured Kennedyâs expression as he viewed the man who would succeed him as president upon his assassination in 1963.

Keywords Click a term to view the records with the same keyword
Portraits
Political
Male
Suit
Portfolio List Click a portfolio name to view all the objects in that portfolio
This object is a member of the following portfolios:

Your current search criteria is: Object is "John F. Kennedy".