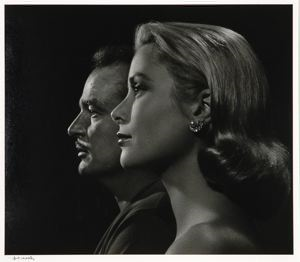 
Princess Grace (1929â1982) and Prince Rainier III (1923â2005) Grace Kelly was an American actress who retired from acting at age 26 when she married Monacoâs ruler, Prince Rainier III. Ranier Louis Henri Maxence Bertrand Grimaldiâs family had ruled the city-state of Monaco on Franceâs Mediterranean coast since 1297. The couple was considered a modern embodiment of Cinderella and Prince Charming. This profile portrait was made the year they were wed. Karsh said, âthe happiness of this couple, who have become the symbol of romance the world over, was evident. This portrait showsâ¦the radiant beauty of the woman, the strong, clean-cut profile of the man.â

Keywords Click a term to view the records with the same keyword
Portraits
Female
Male
Royalty
Portfolio List Click a portfolio name to view all the objects in that portfolio
This object is a member of the following portfolios:

Your current search criteria is: Object is "Princess Grace (Kelly) and Prince Rainier".