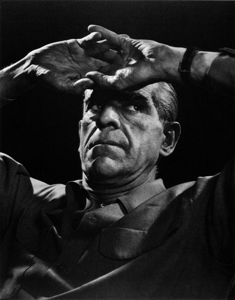 
Boris Karloff (1887â1969) Born William Henry Pratt, son of a British diplomat, he was orphaned as a child and raised by his elder siblings. After college he moved to Canada, then to Los Angeles, acting and working odd jobs to make ends meet. He got his big break when Bela Lugosi turned down the role of Frankensteinâs monster in 1931. Karloff played the monster in three more movies in the 1930s, and starred in many more horror roles. He also played the Grinch in the Dr. Seuss TV special How the Grinch Stole Christmas (1966). In real life, Karloff was a thoughtful, kind, and generous gentleman. He supported childrenâs charities and played Santa Claus for a Baltimore childrenâs hospital for nearly thirty years. When Karsh photographed him, Karloff lived in a modest room in a private club. He talked with the photographer about English gardens and growing roses. Karsh found him âgentle and scholarly, with an exquisitely modulated voice.â Karloffâs unconventional pose with his clasped hands against his head, the cameraâs low angle, and the dramatic lighting combine to suggest something sinister behind the actorâs distant gaze.

Keywords Click a term to view the records with the same keyword
Portraits
Male
Watch
Portfolio List Click a portfolio name to view all the objects in that portfolio
This object is a member of the following portfolios:

Your current search criteria is: Object is "Boris Karloff".