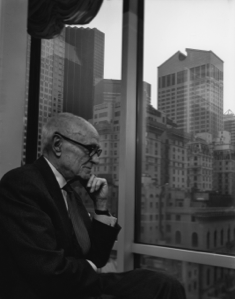 
Philip Johnson (1906â2005) An innovative curator of architecture at the Museum of Modern Art, Johnson later practiced architecture. He was influenced early by the modernist Bauhaus architect Ludwig Mies van der Rohe. Johnson subsequently collaborated with Mies and later indulged in an eclectic variety of architectural styles. Johnson won the American Institute of Architects Gold Medal and a Pritzker Architecture Prize in 1979. Karsh published this portrait in American Legends (1992) with a caption that noted the satisfaction Johnson felt when he viewed his trend-setting, post-modernist AT&T Building (1984) from his New York office window.

Your current search criteria is: Object is "Philip Johnson".