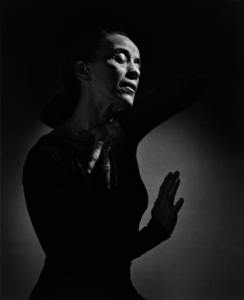 
Martha Graham (1895â1991) Grahamâs impact on dance is comparable to Pablo Picassoâs on art, Frank Lloyd Wrightâs on architecture, and Igor Stravinskyâs on music. She invented a new language of movement uninhibited by the constraints of classical ballet. Karsh initially felt constrained by Grahamâs stark studio with its low ceiling, but he sat her on a stool and âasked her to assume various attitudes as if she had the space of a great stage around herâ¦. This restricted posture presented no problem, such perfect control had she over her bodyâ¦. She seemed to be dancing. In fact, she was dancing.â

Keywords Click a term to view the records with the same keyword
Portraits
Female
Dancing
Hands
Portfolio List Click a portfolio name to view all the objects in that portfolio
This object is a member of the following portfolios:

Your current search criteria is: Object is "Martha Graham".