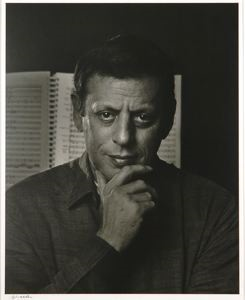 
Philip Glass (born 1937) As in his 1956 photo of Aaron Copland, Karsh caught the composer with his hand on his chin, the bust-length portrait framed by sheet music. In the 34 years since the earlier image, much had changed on the international music scene and Glass was a key agent of that change. He had studied music at the Peabody Conservatory and Julliard, mathematics and philosophy at the University of Chicago, and composition with Nadia Boulanger in Paris. His early music was minimalist in style, much of it initially performed in art galleries and other unconventional concert settings.

Keywords Click a term to view the records with the same keyword
Portraits
Male
Musician
Portfolio List Click a portfolio name to view all the objects in that portfolio
This object is a member of the following portfolios:

Your current search criteria is: Object is "Philip Glass".