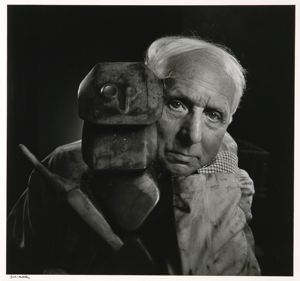 
Max Ernst (1891â1976) Ernst was a self-taught German artist active in Dada and Surrealist circles. He experimented with a wide variety of media and techniques, including automatic writing and drawing. Between the world wars he lived and worked in Europe, immigrating to the U.S. in 1941 when he was married (briefly) to Peggy Guggenheim, a prominent modern art patron. Karsh photographed Ernst wearing a smock and posing with one of his bronze sculptures in his chateau in Tours. Karsh included the portrait in the catalog for his fifty-year retrospective exhibition in 1982, identifying Ernst as the âaging pioneer of Dadaism and Surrealism.â

Keywords Click a term to view the records with the same keyword
Portraits
Male
Artist
Portfolio List Click a portfolio name to view all the objects in that portfolio
This object is a member of the following portfolios:

Your current search criteria is: Object is "Max Ernst".