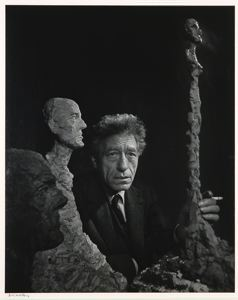 
Alberto Giacometti (1901â1966) The Swiss artist joined the âSchool of Parisâ between the world wars, becoming part of the Surrealist movement and enjoying his most prolific period after World War II. His skinny signature forms with their tortured textures were critically acclaimed as the manifestation of the angst of Existentialist post-war philosophy. Karsh visited Giacomettiâs tiny Paris studio to make his portrait, later reporting that the sculptor âcould not sit still for a minute; he stamped his foot impatiently like a child; he smoked constantly. His face was ashen grey.â Within weeks, the pain-wracked artist was dead from chronic bronchitis and heart disease.

Keywords Click a term to view the records with the same keyword
Portraits
Male
Artist
Sculpture
Suit
Cigarette
Portfolio List Click a portfolio name to view all the objects in that portfolio
This object is a member of the following portfolios:

Your current search criteria is: Object is "Alberto Giacometti".