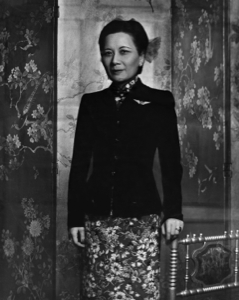 
Madame Chiang Kai-shek (1897â2003) In 1943, Madame Chiang Kai-shek visited the U.S. to raise funds for the Republic of China. She became the first Chinese national and second woman to address both houses of Congress. She also visited Ottawa, where Karsh photographed her wearing a veil in a session that lasted just a few minutes and left the photographer unsatisfied. His biographer, Maria Tippett, revealed that, âKarsh had little time for conversation that might have helped him get beneath the heavy makeup that covered Madame Chiang Kai-shekâs unsightly skin condition and made her face look like enamel.â

Keywords Click a term to view the records with the same keyword
Portraits
Female
Political
Ring
Portfolio List Click a portfolio name to view all the objects in that portfolio
This object is a member of the following portfolios:

Your current search criteria is: Object is "Madame Chiang Kai-shek".