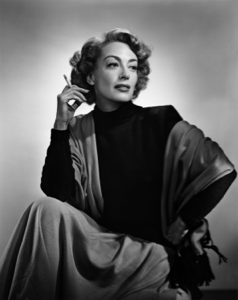 
Joan Crawford (1906â1977) Crawford entered the movie business in the mid-twenties after appearing on stage as a dancer. She eventually moved from musicals to drama. In 1945 she won an Academy Award for her performance in Mildred Pierce. Her later films, many in the horror genre, include a memorable teaming with Bette Davis in 1962 in Whatever Happened to Baby Jane? Karsh was commissioned by Hollywood studios to make most of his portraits of actors, but the sitting with Joan Crawford he won in a tennis match at the Beverly Hills Hotel.

Your current search criteria is: Object is "Joan Crawford".