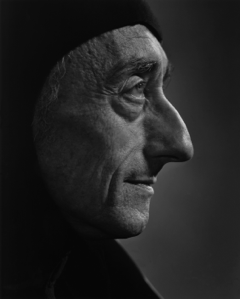 Cousteau pioneered undersea exploration after World War II, first through the development of the aqualung and then through its use in research and filmmaking. He created 120 documentaries for television and published 50 popular books. He made his first book, Silent World (1953), into a documentary film that won a Cannes Film Festival award (1956). The environmentalist observed a 40% decrease in sea life over two decades and warned, âthe oceans are in danger of dying.â He founded the Cousteau Society for marine conservation, received a Presidential Medal of Freedom (1988), and was elected to the AcadÃ©mie franÃ§aise (1988).

Keywords Click a term to view the records with the same keyword
Portraits
Male
Sciences
Portfolio List Click a portfolio name to view all the objects in that portfolio
This object is a member of the following portfolios:

Your current search criteria is: Object is "Jacques Cousteau".