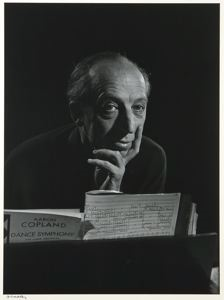 
Aaron Copland (1900â1990) During the mid-twentieth century, âthe Dean of American Composersâ mixed strains of traditional American folk music with a modernist twist on classical forms to create a distinctive sound and style. His scores for Rodeo (1942), Appalachian Spring (1944), Lincoln Portrait (1942), and Fanfare for the Common Man (1942) have become perennial favorites. When Karsh photographed Copland he noted, âthere was about him a certain candor and friendliness that endeared him to me at once.â That warmth and directness is detectable in his portrait, a classic Karsh composition with Coplandâs head highlighted above his musical scoresâone published, one in manuscript.

Keywords Click a term to view the records with the same keyword
Portraits
Male
Musician
Music
Portfolio List Click a portfolio name to view all the objects in that portfolio
This object is a member of the following portfolios:

Your current search criteria is: Object is "Aaron Copland".