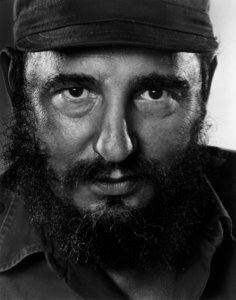 This close-up portrait reveals the intensity of Cubaâs revolutionary communist President. Castroâs eyes are particularly imposing. As usual, he wears his army fatigues and cap. When he arrived for his portrait sitting in Cuba he removed his ever-present belt and pistol. Thus started a three-hour session punctuated with breaks for rum and Coca-Cola. Castro asked Karsh about his experience photographing Helen Keller, George Bernard Shaw, Churchill, Camus, Cocteau, and Hemingway, whose home in Havana is a shrine. Karsh later remarked that he was âimpressed that Castroâa revolutionaryâshould have made room in his life for these creative luminaries.â

Keywords Click a term to view the records with the same keyword
Portraits
Political
Male
Beard
Hat
Uniform
Portfolio List Click a portfolio name to view all the objects in that portfolio
This object is a member of the following portfolios:

Your current search criteria is: Object is "Fidel Castro".