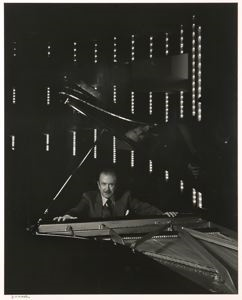 Widely considered one of the finest pianists of the twentieth century, Arrau earned fame for his recordings of classical music. American critic Harold Schonberg said Arrau always put "a decidedly romantic piano tone in his interpretations." The long-lived pianistâs earliest recordings were on player piano rolls, his lastâat the time of his deathâon compact disk. Karsh portrayed Arrau during a rehearsal in Ottawa. The photographer supplemented the ambient lighting of the concert hall to frame the attentive musician within his piano, as though the two were one.

Keywords Click a term to view the records with the same keyword
Portraits
Male
Musician
Musical Instruments
Piano
Suit
Portfolio List Click a portfolio name to view all the objects in that portfolio
This object is a member of the following portfolios:

Your current search criteria is: Object is "Claudio Arrau".