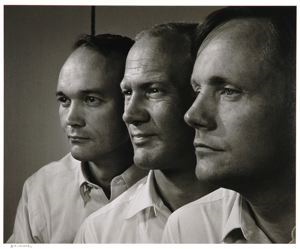 Apollo XI made the first manned landing on the moon. Armstrong was mission commander. Aldrin piloted the lunar module that descended to the moon from the orbiting command module. Collins piloted the command module. On July 20, 1969, Armstrong became the first human to set foot on the moon. When he stepped from the ladder of the lunar lander to the surface, he said, âThis is one small step for man, one giant leap for mankind.â Karsh captured the humanity of the brave men who had trained and worked closely together by filling his photo frame with their facesâdevoid of NASA spacesuits and military insignia.

Keywords Click a term to view the records with the same keyword
Portraits
Male
Sciences
Portfolio List Click a portfolio name to view all the objects in that portfolio
This object is a member of the following portfolios:

Your current search criteria is: Object is "Apollo XI Crew".