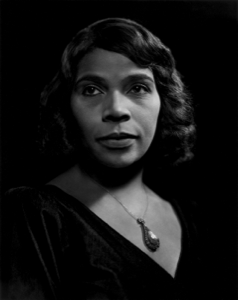 Karsh photographed the contralto at her home near the peak of her career and popularity. In 1939 she had performed an Easter concert at the Lincoln Memorial for 75,000 people and a national radio audience because she had been denied the use of Constitution Hall, then the premier performance facility in the segregated capital city. After several photographs that were unsatisfactory, Andersonâs accompanist arrived for a rehearsal. Karsh secretly asked him to play very softly one of Andersonâs favorite songs. When she began humming, Karsh captured her quiet, thoughtful, peaceful character.


Keywords Click a term to view the records with the same keyword
Portraits
Female
Necklace
Portfolio List Click a portfolio name to view all the objects in that portfolio
This object is a member of the following portfolios:

Your current search criteria is: Object is "Marian Anderson".