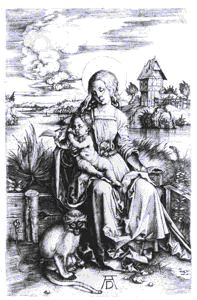 Madonna with the Monkey


This engraving has always held a special appeal, both because of the delicate charm of Maryâs demeanor, and because of the exotic character of the monkey chained at her feet. In works of art of this period, monkeys signified attributes of human behavior such as lust or greed, and were also seen as representing evil or the devil. It has been suggested that here the monkey is shown as a contrast to the Virgin, signifying the victory of spiritual purity over mankindâs baser instincts. The chained monkey may also be an allusion to Eve, again in contrast to the Virgin and her role in vanquishing original sin. The serene and somber expression of the monkey contrasts markedly with the agitation of the bird, which flaps its wings in distress as the Infant firmly grasps its legs. The bird is commonly interpreted as an allusion to the human soul, in this situation probably captive and subject to the will of God. See "Faith and Humanism: Engravings and Woodcuts by Albrecht Durer," exh. cat. (Montgomery: Montgomery Museum of Fine Arts, 2002), 56.

Detail
Portfolio List Click a portfolio name to view all the objects in that portfolio
This object is a member of the following portfolios:

Your current search criteria is: Keyword is "CH".