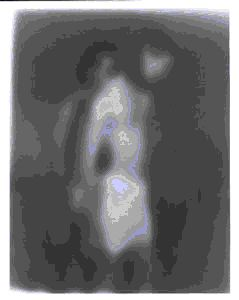 
American photographer Bill Jacobson made a career as a commercial photographer in New York City, photographing art for galleries and dealers. In 1999, however, he decided to refocus his efforts on creating his own art. His photographs address broader themes such as the fragility and mystery of memory, and the transience of life and loss. Jacobson has stated that his work "...refers to the known and unknown; to the well, the dying and the dead and to the fading of our memories and the recurring of our dreams." "It's about coming together and letting go... we all confront the transitory nature of desire, of relationships, and of life itself. Nothing is in a fixed state."

The photograph is from Jacobson's project, "Songs of Sentient Beings". Characteristically, the two figures in the photograph are placed against a dark ground from which they emerge as gray, blurred shapesâthey could be coming into focus, or fading away.

Keywords Click a term to view the records with the same keyword
Figure
Portfolio List Click a portfolio name to view all the objects in that portfolio
This object is a member of the following portfolios:

Your current search criteria is: Object is "Songs of Sentient Beings #1138".