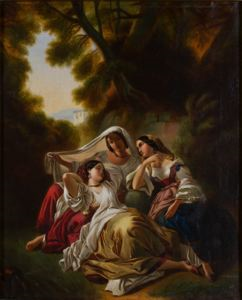 
Nicola Marschall was a native of Prussia who arrived in the Port of New Orleans in 1849. He travelled to the Alabama Black Belt, where he set up as a portraitist depicting members of the planter families who lived in central Alabama.

Between 1857 and 1859, Marschall returned to Europe to continue his art studies in Munich. This highly polished figure group of women in a forest setting dates prior to that time, but exhibits the artist's interest in following the academic style of painting which was much in vogue in the European art academies of the nineteenth century. This painting, while it may have been painted as a decorative object, may also have served as an advertisment for the artist's skills as he sought portrait commissions from the local gentry in central Alabama.

Keywords Click a term to view the records with the same keyword
Female
Figure Groups
Genre
Figure Groups-Women
Gardenscape
Forest
Sleep
Imaginary
Portfolio List Click a portfolio name to view all the objects in that portfolio
This object is a member of the following portfolios:

Your current search criteria is: Object is "Odalisque".