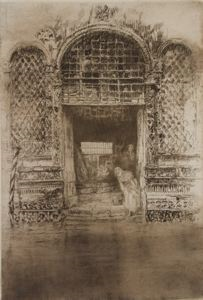 
This is one of Whistlerâs most elegant Venetian etchings, successfully combining the artistâs affection for detail and his innate sense of design to achieve a harmoniously balanced composition. The subject is the Renaissance Pallazzo Gussoni on the upper reaches of Rio della Fava, a canal in the district of San Marco. Whistler depicted the doorway of the palazzo from a low vantage point about ten yards from the portal. The width of the canal at this point is about twelve yards. Although windows and an underpass open to the canal near this spot, the artist undoubtedly rendered this view from a boat, probably a gondola. On this impression of the print, Whistler left a rich layer of ink in the foreground to suggest the turbid water in the canal. He also left a thin veil of ink on parts of the faÃ§ade, yielding less contrast to the dark shadows of the doorway than in other impressions of this print. Whistler included his trademark butterfly etched on the wall above the window on the left, cleverly depicting it as if carved into the marble faÃ§ade.
See "Fleeting Impressions: Prints by James McNeill Whistler," exh. cat. (Montgomery: Montgomery Museum of Fine Arts, 2006), 55.

Your current search criteria is: Object is "The Doorway".