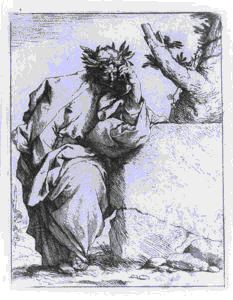 
Ribera was best known in his lifetime as a painter, and his primary subjects were figural compositions depicting saints, Old Testament prophets, and others, often engaged in prayer or contemplation. This etching titled âThe Poetâ is related to those compositions but is not known to replicate a specific painting. Scholars have associated this full-length figure in voluminous robes with authors including the poet Virgil and the author Dante. More recent scholarship supports the connection with Virgil, noting that traditionally the poetâs tomb was thought to be located in Naples. Despite the lack of certainty with regard to the identity of the subject, the figure is an outstanding example of Riberaâs ability to suggest the effects of light, shadow, and tone associated with oil painting through the etching medium.
See Johnathan Brown, âThe Prints and Drawings of Ribera,â in Jusepe de Ribera: lo Spagnoletto, 1591-1652 (Fort Worth: Kimball Art Museum, 1982) 72 and http://www.metmuseum.org/toah/works-of-art/30.54.69, accessed October 22, 2013.

Keywords Click a term to view the records with the same keyword
Figure
Male
Gardenscape
Cloak
Robe
Plinth
Laurel Wreath Crown
Portfolio List Click a portfolio name to view all the objects in that portfolio
This object is a member of the following portfolios:

Your current search criteria is: Object is "The Poet".