The Artist Drawing from the Model 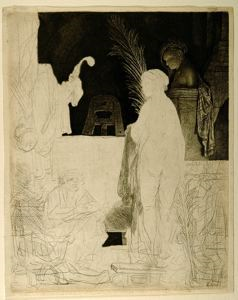 The Artist Drawing from the Model


As an unfinished work, "The Artist Drawing from the Model" is one of Rembrandtâs most interesting and challenging etchings. On one level, it allows us to reconstruct his techniques. He rapidly laid in the outlines of the main forms in drypoint and then returned to the plate with the etching needle, starting with the darkest areas in the background and gradually working up to the more brightly illuminated spots. The print may have been conceived as a permanently unfinished composition. In apparent contrast to his common practice, Rembrandt made a preparatory sketch for this etching. The drawing, now in the British Museum, reveals the artist planned the extreme contrast between the white, un-modelled figure of the woman and the dark background, indicating that at least some of the unfinished passages were to remain only lightly etched at best. Some scholars, however, feel that the etching was abandoned as a failure, possibly because Rembrandt was unable to resolve problems like the placement of the model in space.

Keywords Click a term to view the records with the same keyword
Busts
Interiors
Nude Female
Artist
Portfolio List Click a portfolio name to view all the objects in that portfolio
This object is a member of the following portfolios:

Your current search criteria is: Object is "The Artist Drawing from the Model".