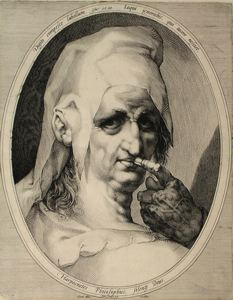 
Harpocrates was the Greek god of silence during the Hellenistic age, and in Greek art he was shown as a small child with his finger to his lips. As we do today, the Greeks and Romans of the classical era recognized the finger to the lips gesture as a request for silence. Muller has transformed Harpocratesâthe figure is not a child, but an old hag. The inscription on the print: âloqui ignorabit, qui tacere nesciet,â roughly translates the advice âbe silent, lest you speak of what you do not know.â

This engraving, and its pendant Chilon (1999.4.2) depict somewhat obscure classical Greek figures. The designs were apparently two of only twenty created by Jan Muller himself, rather than reproductive engravings of the compositions of other artists. Like much of Mullerâs work, both were published by Mullerâs father Harmen Jansz. Muller (Dutch, about 1540â1617) in Amsterdam.

Keywords Click a term to view the records with the same keyword
Busts
Mythological
Allegorical
Legendary
Oval
Antiquities
Portfolio List Click a portfolio name to view all the objects in that portfolio
This object is a member of the following portfolios:

Your current search criteria is: Object is "Harpocrates".