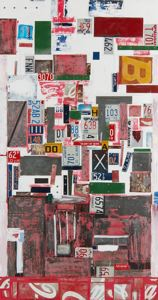 
Credit Line: Anonymous gift in honor of Marion Arrington, for her many contributions to the arts in the Montgomery community


In addition to the photography and sculpture that form the bulk of his work, Christenberry has made a number of wall constructions comprising found objects and other materials. The first was "Southern Monument" (1979), commissioned by the General Services Administration Art-in-Architecture program for the Federal Building in Jackson, Mississippi. The elements favored by Christenberry speak to a shifting cultureâold, weather-beaten, metal advertising signs, car license plates, painted and rusted metal scraps tying together remnants of the past.

In 1985 Christenberry built "Alabama Wall", a square construction now owned by the Smithsonian American Art Museum, Washington, DC. "Alabama Wall (Variant)" was commissioned by The Montgomery Museum of Fine Arts in 1992 for installation in a niche over a doorway in the museumâs rotunda. The work is rectangular, designedto be seen from a distance and from below. The first "Alabama Wall" is a dense assemblage of materials, predominantly license plates and other bits of rusted metal. The museumâs variant seems lighter and more festive, dense at the bottom and visually less heavy at the top. Christenberry used the dismantled calligraphy of an old Coca-Cola sign to set the tone at the base, from which the other materials rise like fizz to the top. The work embodies the famous words of Ageeâs preface to "Let Us Now Praise Famous Men": âIf I could do it, Iâd do no writing at all here. It would be photographs; the rest would be fragments of cloth, bits of cotton, lumps of earthâ¦. Booksellers would consider it quite a novelty; critics would murmur yes, but is it artâ¦?â Christenberryâs Walls are similarly fragmentary evocations of the American South.

Front
Portfolio List Click a portfolio name to view all the objects in that portfolio
This object is a member of the following portfolios:

Your current search criteria is: Keyword is "LO".