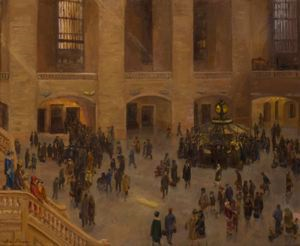 
Sloanâs practice as an illustrator inevitably influenced the way he approached his painted works. He was interested first and foremost in people, their interactions, environments, and personalities. "Grand Central Station" is a classic Sloan city scene. After the Armory Show in 1913, the artist abandoned his dark palette and began avoiding the use of traditional chiaroscuro for modeling. He chose instead to use gradations of color to define form. This change is reflected here in the carefully graduated tones of brown and yellow that model the station's interior. Shapes built up in one prevailing color (the brick piers, for example) are accented with touches of bright, clear color in the same hue. In choosing a viewpoint that looks down into the station, Sloan emphasized its monumental grandeur; its architectural scale suggests a type of secular cathedral.

American Paintings from the Montgomery Museum of Fine Arts, cat. no. 53, p. 138.

Keywords Click a term to view the records with the same keyword
Figure Groups
Urban Life
Railroad
Interiors
Clock
Stairway
Landmarks
Station
Portfolio List Click a portfolio name to view all the objects in that portfolio
This object is a member of the following portfolios:

Your current search criteria is: Object is "Grand Central Station".