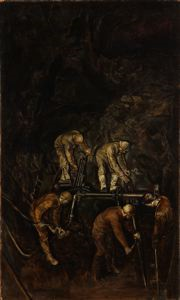 
Reginald Marshâs habit of constructing compositions from drawings is evident in "Sand-Hogs", an image of men working in an underground excavation. It appears that Marsh combined different sketches to create this scene, painting the background from one sketch and each of the figures from separate drawings, perhaps made at different times and places. This gives the figures the appearance of floating in front of the background, rather than being integrated into it. The studied gestures and poses of the workers are not interrelated, suggesting that Marsh analyzed their individual movements in drawings and transposed them to the painting as separate entities. The labor portrayed here was ongoing in mid-twentieth-century New York, as workers built or repaired the elaborate system of tunnels and bridges that connect the cityâs boroughs by road or rail. The excavators were called âsand-hogs.â The museum received this painting with documentation indicating that it once belonged to Edward Laning, an artist friend of Marshâs who sometimes accompanied him on sketching expeditions. Laning noted that Marsh gave him the work in around 1939 or 1940, and that âto the best of my recollection this is the Brooklyn-Battery Tunnel which Marsh sketched when it was under construction.â Construction of this tunnel began in October 1940, and it opened in 1950; therefore Laning was mistaken either about the date he received the work or the site depicted.

Keywords Click a term to view the records with the same keyword
Rock
Figure Groups-Men
Industrial
Engine
Electrical Lamp
Laborers
Construction
Power Tools
Portfolio List Click a portfolio name to view all the objects in that portfolio
This object is a member of the following portfolios:

Your current search criteria is: Object is "Sand Hogs".