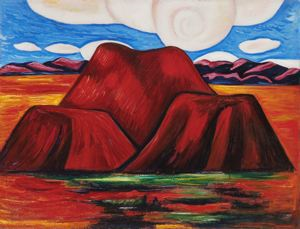 
"Earth Warming" is one of twenty paintings in a series titled "Murals for an Arcane Library" created while Hartley was living in Mexico. Having won a Guggenheim Fellowship in 1931, Hartley elected to paint and study there for a year, arriving in March of 1932. It is believed that "Earth Warming" was painted in Cuernavaca in 1932.

Although not naturalistic, the painting is clearly a rugged and mountainous landscape. The brilliant red rock formations appear to soak in the rich, reflective colors of the sunâs rays. When contrasted with the clear blue sky and rolling white clouds it is as if Hartley is attempting to communicate the essence of spiritualityâthat which is physically unseenâthrough the contrasting natures of hot and cold coloration. Hartley was drawn to mountainscapes and monolithic shapes throughout his career, in seemingly every locale he visited, and these looming structures were consistently located and recorded. The monumental nature of these forms suggested natureâs inescapable power over man.


Keywords Click a term to view the records with the same keyword
Abstraction
Rock
Mountains
Rocky Landscape
Cloudy Sky
Clouds
Portfolio List Click a portfolio name to view all the objects in that portfolio
This object is a member of the following portfolios:

Your current search criteria is: Keyword is "NI:NJ".