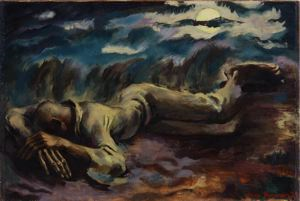 
The Lover" was inspired by Charles Shannonâs experience of rural black Southern culture. While he portrayed the people with whom he lived and worked, he maintained that his themes came from his imagination. At the time of his retrospective in 1981, Shannon recalled painting "The Lover." âI had a studio on the second floor of a servantâs house near downtown Montgomery. One night in the fall I began working on a sketch in charcoalâthe image just came to me.â He embarked on the canvas the next morning and had finished it by the end of the day. With its elongated figure and dark, brooding coloration, "The Lover" demonstrates Shannonâs highly expressive style. It conveys his empathy for the suffering of the rural poor through the integration of the tortured figure, with its attenuated limbs and bony fingers, into an environment of ominous portent demonstrated in the moonlit, blustery sky. This subject closely relates Shannonâs work to the Regionalist and the Mexican muralist schools of painting that flourished in the 1930s. "The Lover" won third prize at the exhibition of contemporary painting at the San Francisco International Exposition of 1939.

Keywords Click a term to view the records with the same keyword
Figure
Male
Moon
Sadness
Portfolio List Click a portfolio name to view all the objects in that portfolio
This object is a member of the following portfolios: